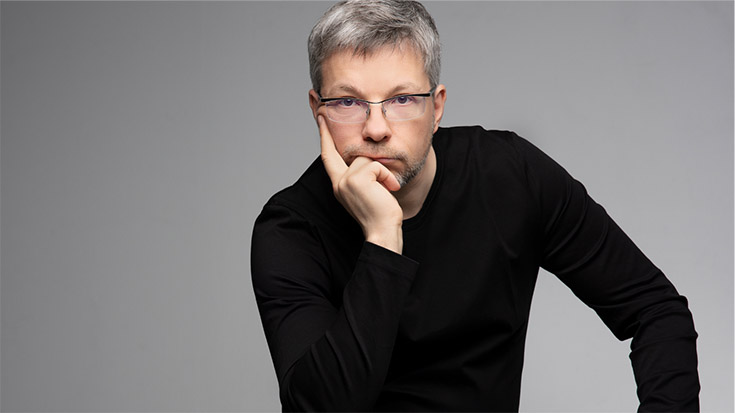 Olari Elts’ passion for distinctive programming rich with invention has earned him much praise on the international music scene. He began his tenure as Music Director and Chief Conductor of the Estonian National Symphony Orchestra in 2020. Since 2018, he is also Artistic Advisor of the Kymi Sinfonietta.

In the 2021/22 season, Elts will lead the Estonian National Symphony Orchestra on tour to Poland, as well as guest conduct orchestras with which he has regularly collaborated such as Helsinki Philharmonic Orchestra, Staatskapelle Weimar, Slovenian Philharmonic and Sinfonietta Rīga. He also looks forward to his debut with Oslo Philharmonic, Prague Radio Symphony, Polish Baltic Philharmonic in Gdansk and further afield with Orchestre Symphonique de Quebec in Canada and National Symphony Orchestra in Taiwan. Other highlights include conducting a new ballet production based on the life of Sibelius, in celebration of the Finnish National Ballet’s 100th year anniversary.

As a champion of contemporary Baltic composers such as Erkki-Sven Tüür and Heino Eller, Elts has released recordings of Heino Eller’s Symphonic Poems as well as Eller’s violin concerto with Baiba Skride and the Estonian National Symphony Orchestra. Also widely celebrated by critics are his Ondine recordings of Erkki-Sven Tüür works with Tapiola Sinfonietta including the viola concerto with Lawrence Power, and Tüür’s Symphony No. 5 for electric guitar, orchestra, big band and the accordion concerto Prophecy with the Helsinki Philharmonic. His 2016 recording of Brahms’ arrangements (Glanert, Berio) with Helsinki Philharmonic Orchestra also won high praise. Elts’ discography also includes the Borgström and Shostakovich violin concertos with Eldbjørg Hemsing and the Wiener Symphoniker under the BIS label, and Poul Ruders Symphony No.5 with the Danish National Symphony Orchestra by Bridge Records. His upcoming release will feature music by Kalevi Aho, recorded with the Kymi Sinfonietta under the BIS label, and another disc of the same composer recorded with the Antwerp Symphony.

Elts also made his mark in the opera field, having conducted titles such as Eugene Onegin, Mozart’s Don Giovanni and Idomeneo, Berlioz’s La Damnation du Faust, etc. Crossing genres, Elts toured to the Konzerthaus Berlin with the theatre-concert production which combines Mendelssohn and Shakespeare’s “Midsummer Night’s Dream” with the Tallinn-based theatre company NO99. For Bernstein’s 100th anniversary, Elts conducted the film “On the Waterfront” with live orchestral accompaniment of the soundtrack. Elts was Principal Guest Conductor of the Estonian National Symphony Orchestra from 2007-2020 and held the same position at Helsinki Philharmonic Orchestra from 2011-2014. He was also Artistic Advisor of the Orchestre de Bretagne from 2006-2011, Principal Guest Conductor of the Scottish Chamber Orchestra from 2007-2010 and Chief Conductor of the Latvian National Symphony Orchestra from 2001-2006. Born in Tallinn in 1971, Elts is founder of his contemporary music ensemble, NYYD Ensemble.